Visit the undiscovered City of Bagnoregio

Today we went on a shore excursion to the Undiscovered City of Bagnoregio. Curious name - if it's "undiscovered", how can we find it??!!

Well, we found it. How could you miss it? It is a stunning medieval city, perched on top of a plateau, overlooking the Tiber River valley.

It was founded by the Etruscans more than 2,500 years ago. It was the birthplace of Saint Bonaventure who died in 1274. The locatiion of his boyhood home has long since fallen off the edge of the cliff. By the 16th century, Bagnoregio was beginning to decline and by the end of the 17th century, the municipal government was forced to move due to a major earthquake that accelerated the old town's decline. It is now known as The Dying Town.

The city is much admired for its architecture spanning several hundred years. The population today varies from about 7 people in winter to more than 100 in summer.

The town was placed on the World Monuments Fund's 2006 Watch List of the 100 Most Endangered Sites, because of threats it faces from erosion and unregulated tourism.

Early rise this morning as we are going ashore in Rome. We had to turn our clocks back one hour and for some reason, this proved quite difficult so we set three alarms and they all went off at different times; one at 5 am, one at 5.50 am and one at 7.00 am, when we were aiming for 6 am! Anyway, we were up and dressed and ready for our breakfast at 6.45 am.

It is very overcast, quite cool and pouring with rain. This ship has different paintwork! 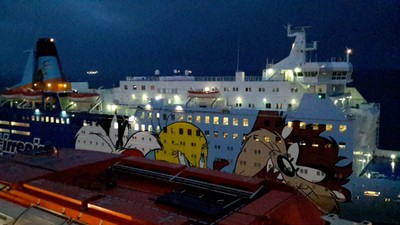 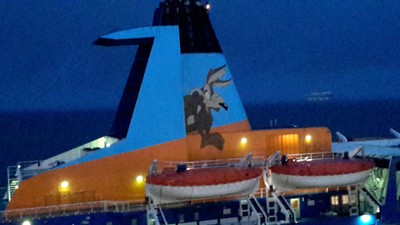 By the time we went ashore, the rain had stopped, but there is a very threatening sky. We have three bus loads going to the undiscovered city of Bagnoregio, where only six people live, the oldest being 103.

It took about two hours driving to get there - 100 kilometres but on back roads. At least being Sunday is a help - not much traffic.

The Italian countryside is green and beautiful. We passed through lots of small towns and villages, oozing charm. I have always loved Italy. Crumbly and falling down, but oozing charm.

We arrived at Citiva di Bagnoregio, in the Viterbo province of Lazio, along with several other tour buses but definitely nowhere near the amount that were at Petra. We queued for a while, waiting for a shuttle bus to take us to the ticket office, where we would then commence our walk, up and down and then up, up, up to this magnificent medieval city on top of an enormously high rock.

Our first glimpse of Bagnoregio was jaw dropping. It is simply magnificent. Watching people slowly walking along the path to the top, reminded me so much of the Great Wall of China. 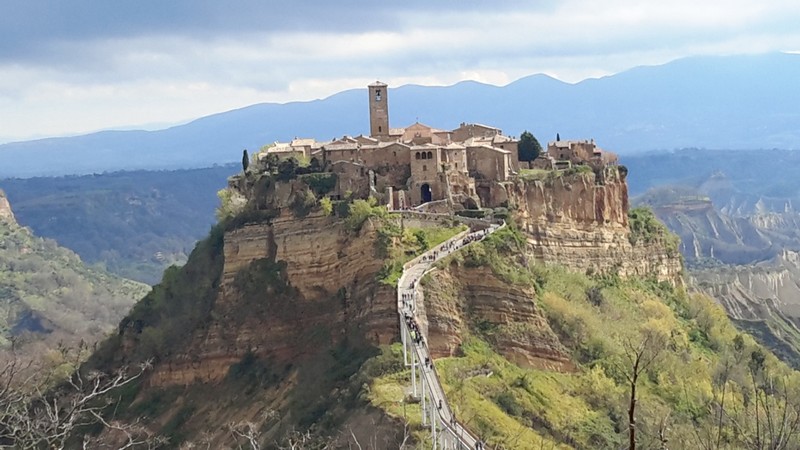 It was quite an effort to walk to the top. The new, strong cement and iron bridge was constructed in the 1950s - before that there was just a ricketty old wooden bridge and when the wind was blowing, it had to be closed. 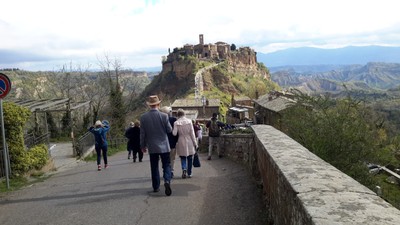 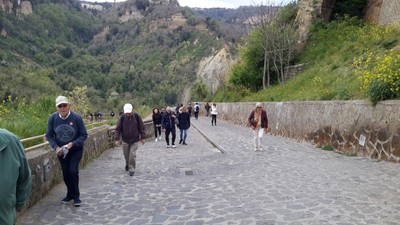 The town is about 300 m wide and 200 m long so it is impossible to get lost, even for me. There is a town square, with a church and a few streets radiate off it.

It was built in the 13th century by the Estruscans. They chose such a high place to avoid being attacked. Well, let me tell you, no self respecting enemy would have the strength to climb that high and then launch an attack!

We had about three hours on our own to wander around this fantastic place. It also reminds me a lot of San Giminano in Tuscany. There were photo opportunities everywhere you looked. 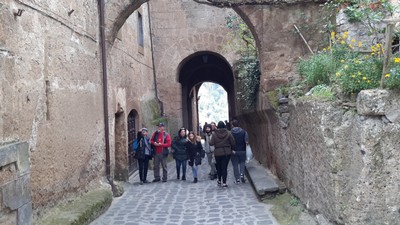 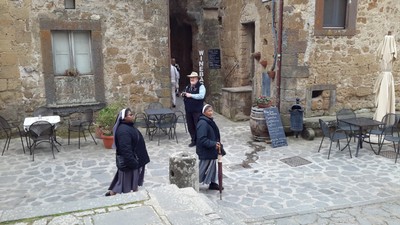 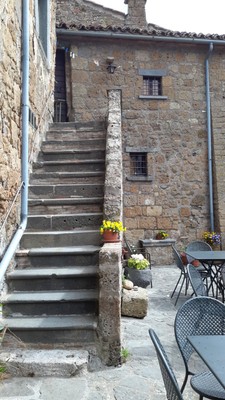 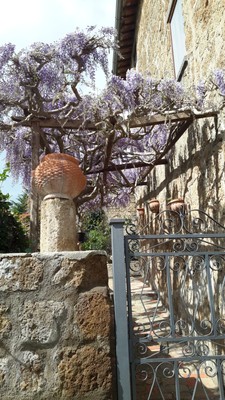 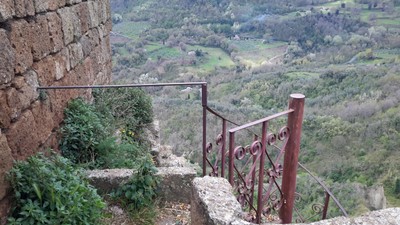 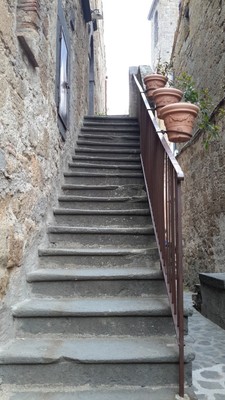 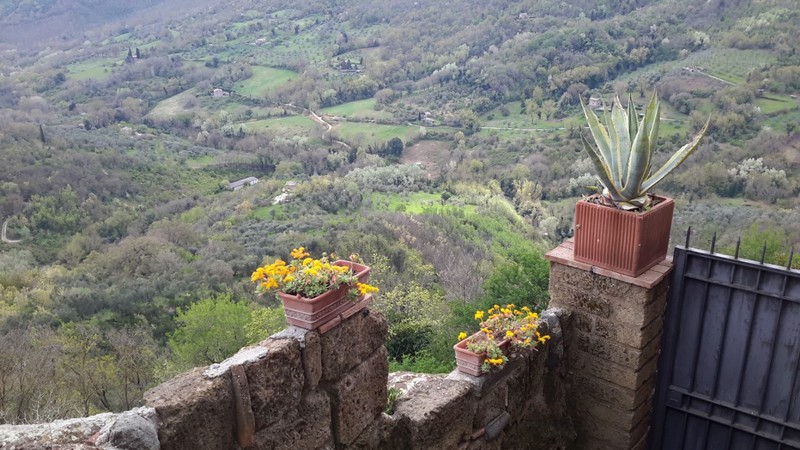 We found a lovely B&B called Trattorio Antico Forno and went in for lunch. We were the first there and Phil chatted with the owner who then provided us with some of his home made red wine. Just delicious. Then we ordered several different types of bruschetta, some sausage and a coffee. There is nothing quite like a genuine Italian feast in a genuine Italian village. Belissimo! They even had free Wifi which turned me into a rude person, emailing at the table, but I had to reply to a couple of urgent emails. The bill was 37€, so we gave them 40, for a most enjoyable experience. 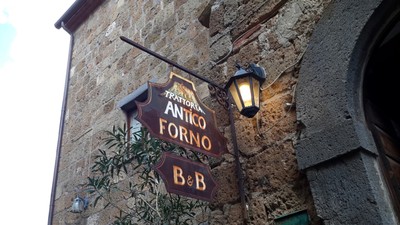 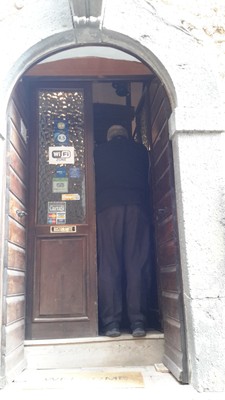 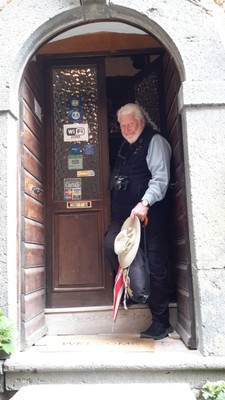 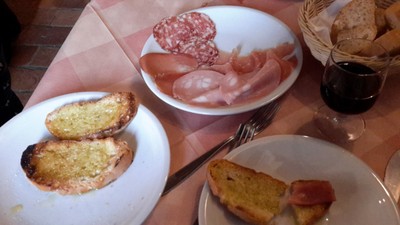 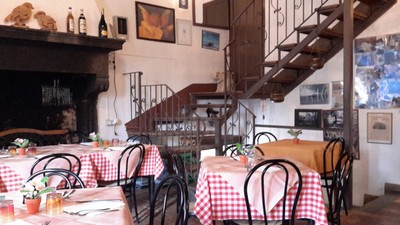 All too soon, it was time to leave for our "climb" back up the hill to the top. It wasn't as bad as I thought it would be, but Phil suffered a bit with his breathing because of his cold. What a fantastic trip this was. It is one of those places that you will never forget and will tell everyone who are visiting this area, that it is a MUST to visit. 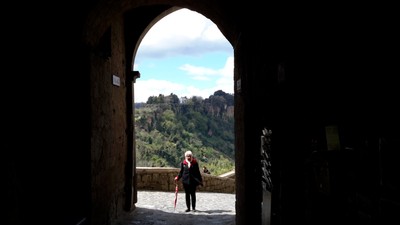 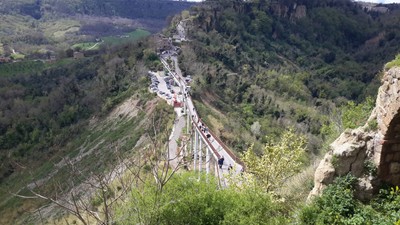 Because it is Sunday and the roads are very quiet, we were back at the ship before 4 pm, so time for a nice cold beer, sitting on the balcony, sun baking and writing my blog.

Thank goodness it didn't rain today. It was cool but that was a blessing for all the walking we had to do. The sun came out mid afternoon and it is even quite warm. 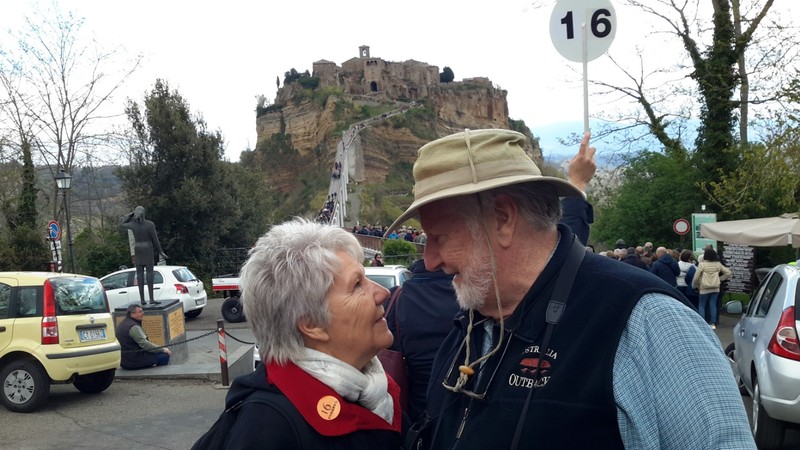 Posted by gaddingabout 01:03 Archived in Italy