Very sad day today. Our journey is over. It has been an amazing six weeks, culminating with the Royal Victorian Order function at Windsor Castle yesterday. We went to breakfast at 8 ish as we both still have to pack.

We had breakfast with Maria and Doug, then Amanda and Jennifer came along, followed by Caroline and Geoff Hay. Then came Gerry and Gerri Warner. I am also pleased to report that after five breakfasts, Phil's eggs were perfect this morning! He has had an ongoing battle with the kitchen on how to cook fried eggs, with the white hard and the yellow runny. The girl in the dining room has been SO good natured about this and each morning the eggs got better and better and today they were perfect. We laughed a lot this morning and we had a big hug when we left the dining room. I think she was very glad we were checking out!

We have had the media camped in the room next door to us all week, waiting for Baby Sussex. We have become quite friendly with them and on the way out today I asked them exactly why they were camped at the front gate of Windsor. "Because Harry and Meghan live at Frogmore House on the estate". "Yes, I know, but do you think they are going to bring the baby (whenever it arrives) out to the front gate of Windsor Castle?" "No", they said, "then why have you been camped here for a week?" "Because that's what we were told to do by the boss". Nice work if you can get it, but pretty boring I would imagine, hanging around for days and days waiting for something to happen!

Check out time is 11 so we packed up and were down stairs at about 10.30, saying our goodbyes to everyone. It is absolutely freezing today. It was 2 degrees overnight and now it is about 4 and the wind has started up, and it's cold. The Brown Button came to say goodbye too. Gregg is not feeling too well, so he didn't come to say goodbye as he didn't want to spread whatever he has around. Now that is thoughtful. 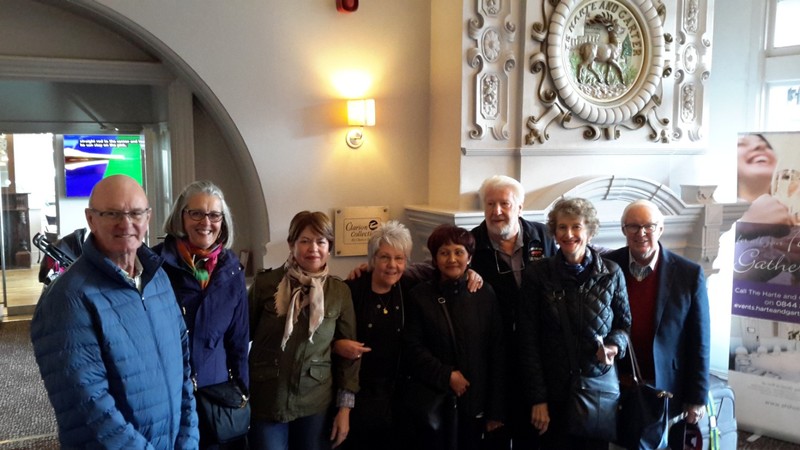 We shared a taxi with Doug and we got out at Terminal 3 and he continued on to Terminal 4. This leg from London to Dubai is an Economy flight for us (eek, we haven't done that for a long time but it was all we could get when we had to change flights).

So we are heading towards a very long queue of Economy passengers, when a guy beckons us over to the Business Class line, which only has a couple of people on it. "We're travelling Economy", I said. "Doesn't matter", he said. I think it is the grey hair that does it every time.

Checked in and we are now heading for immigraton - fine - next step is security checking, which Phil always fails, but he is quite certain that he'll be fine this time.

No, his carry on bag is kept back so he had to open it and stand back while they systematically went through it layer by layer and finally, right in a bottom corner they find the offenders - three small jam jars full of VEGEMITE! So the jars are placed in a plastic bag and go through the scanner again. They are cleared and we are allowed to continue on our way with the offending Vegemite.

At security, a woman in a full burka had to take her shoes off before proceeding through the scanner. I wondered about this because no one else had to take their shoes off, so why should she. If she had anything concealed, it would be revealed on the scanner. 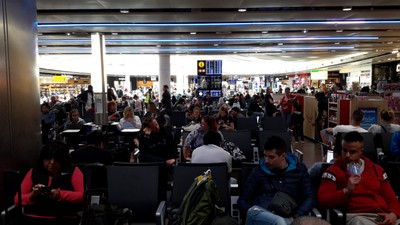 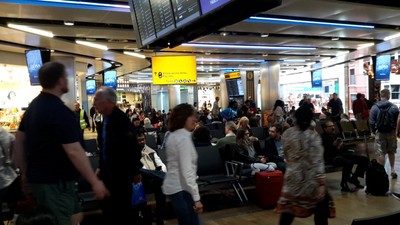 We had a coffee and a couple of lovely fresh ham and cheese rolls and then wandered around to our gate and in no time we were boarding. We are both sitting in the same row, but with the aisle between us. We are on an Emirates flight and have plenty of room. I usually sleep on flights but this flight was only six and a half hours so I watched three movies - Mary Poppins Returns, Mother's Day and the Professor and the Madman. They were all pretty good, but it took a while for me to get into the Professor and the Madman.

We landed in Dubai at about 11.45 pm and by the time we had cleared immigration, collected our luggage, caught a taxi and checked into the hotel, it was 2 am when we arrived in our room. Not tired at all.

When we checked in at 2 am, we asked if we could have a late check out. Yes, how about 3 pm. Well, as our flight is at 8 pm, we were wondering if we could check out at 6 pm. No, the hotel has a group arriving at 2 pm (so what does that have to do with us?), but after a lot of friendly bartering, we agreed on 5 pm, which is fine for us, because we can go into the Singapore Airlines lounge at the airport. However, I think airport hotels should be a little more flexible with their check-in and check-out times. If you arrive at 2 am in the morning, you should be entitled to 24 hours stay, especially when you are paying full price $200 AUD plus for a room. Their clientele is a little bit different from the normal tourist who is staying for a week. Just saying.

Posted by gaddingabout 00:22 Archived in England