Set the alarm for 7am. Don't know why because we went back to sleep until 8ish and then went to breakfast and chatted at length with Robin and Chris.

It's going to be a lazy day today as there is not much on the program that I want to see, except the Big Band performance after dinner tonight.

I am trying to find the energy to walk around 7 deck a few times.

I noticed last night that I had lost a diamond off the front of my evening shoes and miraculously found it on the floor this morning. Unfortunately I didn't bring a tube of SupaGlue with me, as I usually do, so I will have to keep the diamond safe until I get home.

It is exactly one week since we left home. It feels like ages, but in a very good way. People lined up all along the deck taking in the sun. These are the people from the cabins that don't have a balcony. 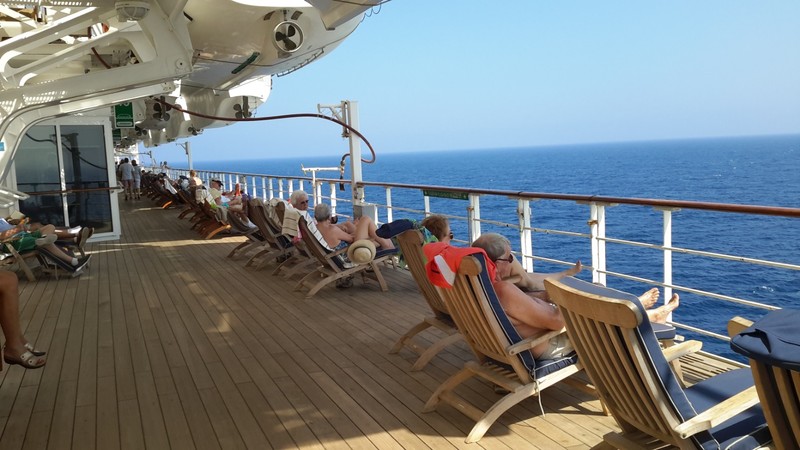 I went for a walk around 7 deck this morning. Five times around - 5 1/2 kilometres. It felt good. Then we went to lunch and I chose a Coronation Chicken Baget which wasn't so good. Coronation Chicken is what the people ate at their street parties in the UK after the coronation of Queen Elizabeth. It is chicken in a light curry sauce with raisins. I had one in Scotland once. It was nothing like that and was pretty awful. The worst meal I have had on this ship. Every other meal has been outstanding!

We watched the movie "Crazy Rich Asians" this afternoon in our cabin. It is a bit of a chick flick but it was entertaining enough.

Before dinner we went to a ventriloquist's show. He was quite funny and a very good ventriloquist. He actually had come fourth in Britain's Got Talent.

For dinner tonight we had Chateau Briand specially made for us. It was delicious. The quality of the food in the Queen's Grill is outstanding.

Posted by gaddingabout 03:13 Archived in Jordan