Lazy day at sea today, so we slept in and rushed into breakfast by 9 am.

I went to hear Part 2 of John McCarthy's address about his release from his five year capture in Beirut.

The wind is force 7 today and is quite cool and very strong. The sea is choppy but we don't feel a thing in midships on this ship.

We had a light lunch in our cabin and had another very lazy day.

We passed the Rock of Gibralta at about 6 pm. 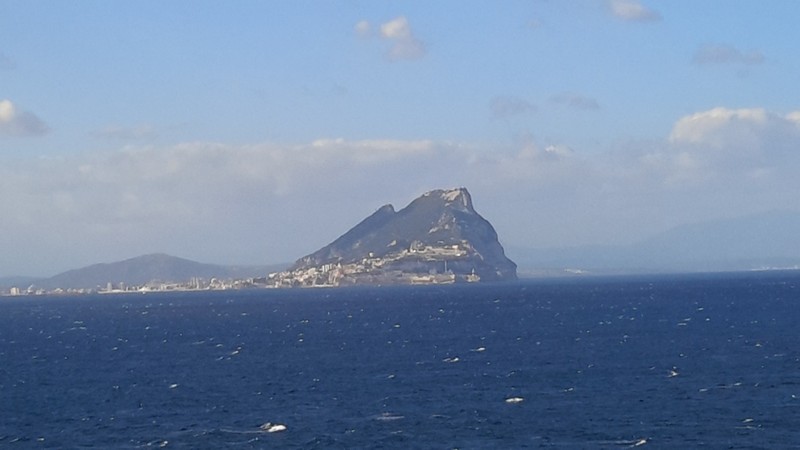 At dinner, the chef had made the lovely Portuguese custard tarts. They were very good - not quite as good as the originals, but delicious nevertheless.

Wind clocks back another hour tonight. Now we are on UK time.

We have now docked in Barcelona. It is the capital of Catalonia and Spain's second largest city. We have visited Barcelona before and been to Antonio Gaudi's Sagrada Familia, and strolled down Las Ramblas and Phil has visited the huge stadium that is the home of Barcelona FC and we've been to Montserrat.

So today we went on an excursion to visit Tarragona Old City whose historical quarter is full of Roman and medieval remains. It was declared a World Heritage site by UNESCO. Its origins trace as far back as 218 BC, when the first Roman presence was felt on the Iberian peninsula.

The remains of the Roman walls are impressive and we entered the walled area through "Portal del Roser". On our walking tour through the lovely old city we saw the Roman remains of the Provincial Forum, the Pretorio, the Roman Circus (no animals left - sorry), and the Amphitheatre. We also stopped at the Cathedral of Santa Maria and the Diocesan Museum.

Up early this morning for our trip to the medieval town of Tarragona.

It was dark and raining as we got up, but as has been the norm, the rain goes before we go ashore and it turned out to be a very lovely day - quite warm, in fact.

It took us an hour and a half to drive to Tarragona. Half way there we stopped for a "comfort" stop, which was the only one we were given all day. Not good enough for "old" people who need to go to the loo frequently.

We drove through Barcelona city and it was nice to recognise some of the places we visited a few years ago.

Along the way we stopped to photograph the Pont del Diable, an old Roman aquaduct. It was quite impressive but there were a lot of trees in the way. 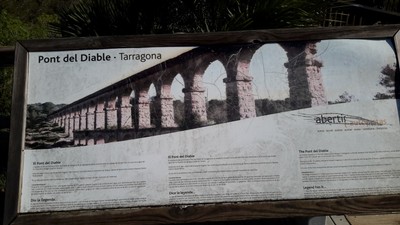 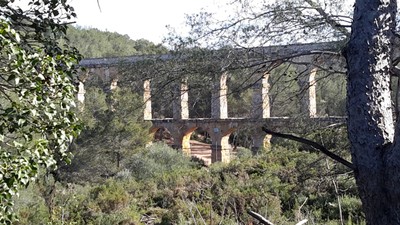 Our tour guide was Spanish and had a good command of the English language, but he spoke very quickly and had a very strong accent, so consequently he was very hard to understand. 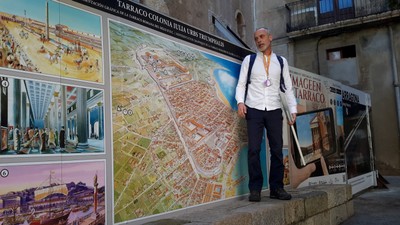 Tarragona is on the coast and is a very pretty place. 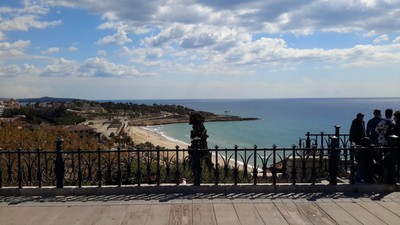 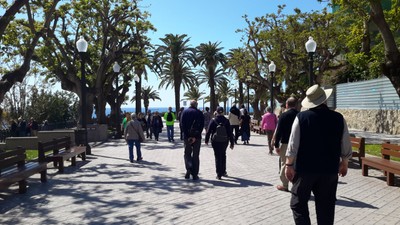 We pulled up at an old Roman wall and we all got out of the bus. I didn't realise it was the old Roman city we were supposed to be visiting. An announcement would have been good. Anyway, we went inside and it was very important to stick with the guide because it was a very complicated laid out town and would have been very easy to get lost. People have renovated apartments in the town so it is a mix of the very, very old and the old that has been renovated. It had lots of narrow winding streets. 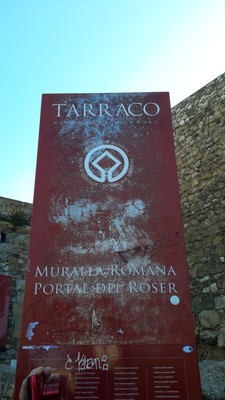 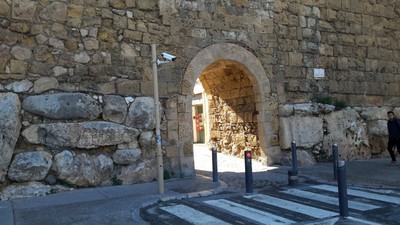 We spent an awful lot of time in Santa Maria Cathedral. We were lucky that it was Tuesday, as there were no services being held so we could wander around and take photos of the old tapestries and frescos. It really was quite lovely. 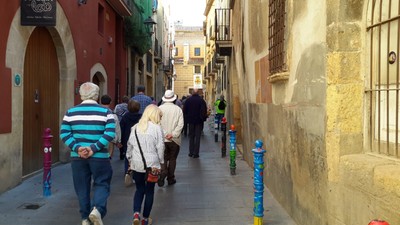 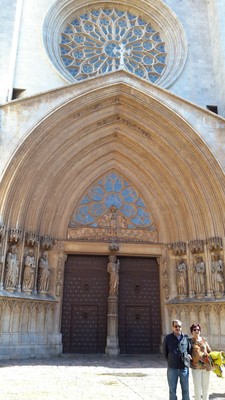 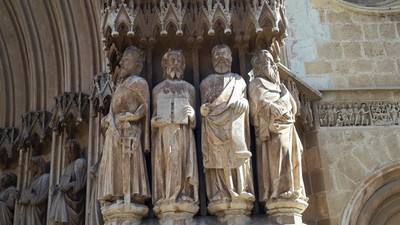 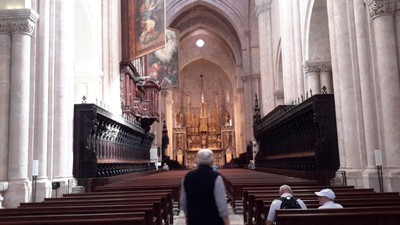 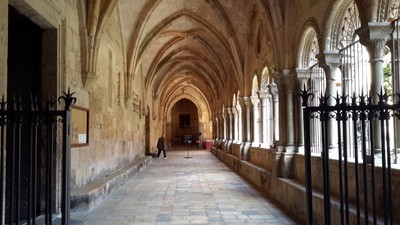 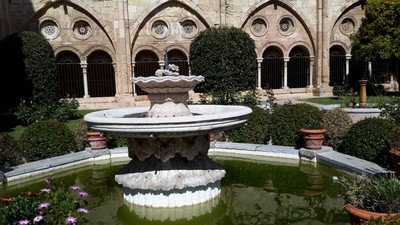 Outside, the guide showed us the top of the cathedral and said that this remains unfinished as a result of The Black Death. All the workers died and it has never been finished. 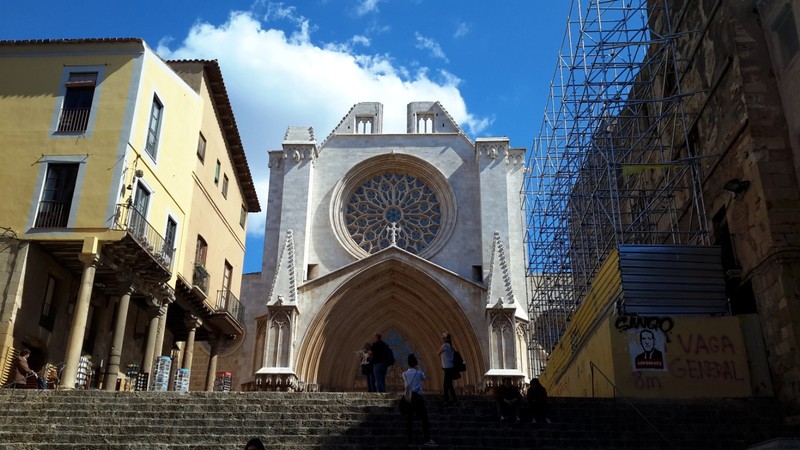 We walked down to the amphitheatre, took a photo and then we were given 20 minutes free time, which just gave us enough time to buy a sausage in a roll for lunch and go to the loo and then we were back on the bus and heading back to the ship. 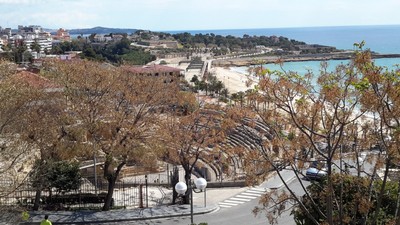 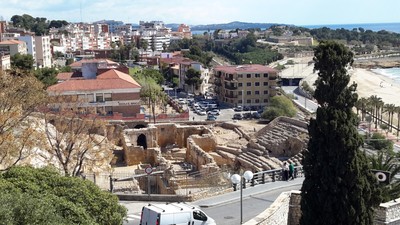 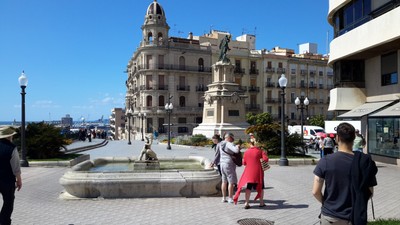 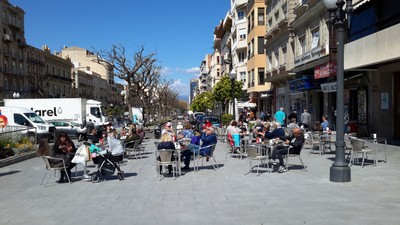 I collect icons and would loved to have bought one at the church, but we weren't given any time to stop and shop.

We were back on board at 2.30 pm which could have given us a lot more free time wandering around Tarragona as we weren't sailing until 4.30 pm.

We had afternoon tea in the Queen's Grill and then Robin and Chris joined us.

At dinner we were talking to our Maitre de Osman about the delicious custard tarts that are made in Lisbon. He said he would get thd recipe and ask the chef to make them for us!!! If he can pull this off, I will sing their praises long and loud. So far, they are provided everything we have asked for, and them some. It has been wonderful.